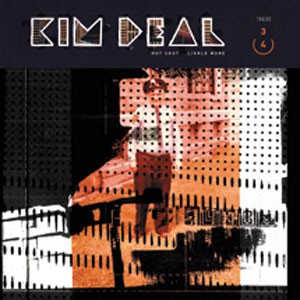 Hot Shot:
"I played electric guitars, bass guitar and vocals. Jose Medeles (a previous Breeders drummer) played drums. This was recorded at Type Foundry and with Steve at Electrical. And Greg Norman mixed it at Electrical, in Chicago.

All recorded in the analog domain. All mastered by Ryan Smith at Sterling Sound in NYC using Direct Metal Mastering.
I played the guitars and vocals and Steve Kille (Dead Meadow) recorded it for me in the cellar of the house I was renting out in Los Angeles. It was recorded on my Tascam 1/2" - 16 track machine. Likkle More is "see you later" in patois, btw. Likkle More:

This was mixed by Greg Norman at Electrical in Chicago. All analog, all mastered DMM.

The 7" package has an insert. It's a glossy print card that has a picture of my crazy face. It looks like a Polaroid. Because it was a Polaroid of me. And we made copies of the Polaroid and we stick them into each record. And I sign some of them"...