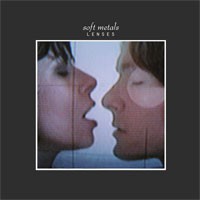 Soft Metals is an electronic duo formed in 2009 by Ian Hicks and Patricia Hall currently based in Los Angeles, California. They met in late 2008 at a DJ night hosted by Patricia in Portland. Work began on their self produced, self recorded 2nd LP "Lenses" in the summer of 2012. They sketched out what would become the song "Lenses" and work then continued into the fall and winter. When they went into recording album 2 they wanted to focus more on a sound with beats and rhythms you can move your body to, melodies you can connect with emotionally, and vocals that coax your mind into a dreamy introspective luminal space.

The idea behind "Lenses" is about breaking out of thought patterns and previously held ways of seeing yourself and the surrounding world. Lenses; a continuation of their ethos aiming directly at your body and subconscious mind with an intimacy that only lovers can bring. The song “Lenses” describes the experience of shifted consciousness with the lyrics “breaking through my perception of you, breaking through my concept of life”. It celebrates the feeling of escape from a mind imprisoned with lack of presence and stuck in habit all set to an earnest beat and lush enigmatic melodies that entwine and seduce.

“Tell Me”, “No Turning Back”, When I Look Into Your Eyes” expresses that nervous, vulnerable feeling of falling for someone, but questioning the reality of the situation asking “Is this love true? Or are we just lost in lust?”, “when you said you loved me, I laid my whole life down”, “When I look into your eyes, I wonder if we’ll meld”. “In the Air”, perhaps the most movement inspiring track of the album, is a dense, pulsating piece about the power of nature, the effects of seasonal changes on all living things that rule over sexuality, productivity, and inspiration- the basis of man’s various forms of mysticism.