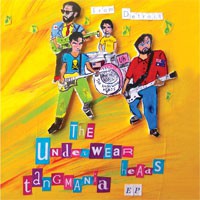 Recorded at Rock 'n' Roll HDQS Fall 1980. The Underwear Heads were long-rumored to have been a fictional creation. Evidence of their existence over the past 30 plus years had been reliant upon a picture sleeve for a single that never came with a record. Due to the copycat nature of punk collectors' want lists, the legend of the U-Heads extended far-and-wide as "the sleeve without a record." Truth of the matter is that vinyl was pressed for the release, but due to a manufacturing error all copies were defective and were unceremoniously destroyed while some sleeves managed to slip into circulation.

Third Man was able to track down band member John Crenshaw (brother of esteemed Michigan-born songwriter Marshall Crenshaw) who instantly claimed he'd not heard the band's name uttered since 1983. Bandmates Nick Canterucci, Art Lyshak and Bruno Burroni were conferenced in, an early-generation master was located in Australia and the world is finally privileged to hear the Tangmania EP. The six songs on this self-recorded 7" run the gamut from silly drum machine punk, outre experimental tape manipulation and art rock spaciousness.