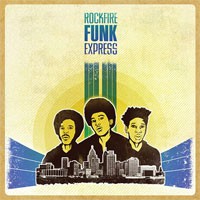 While RockFire Funk Express never released any music while they were officially a band, in 1973 they recorded a two-song single at United Sound Systems, a legendary Detroit studio that recorded everyone from John Coltrane, John Lee Hooker, the MC5 and countless others. The a-side "People Save the World" is a propulsive, socially-conscious, exercise in primitive funk rock. The b-side shares its title with the band's name and is a breezy, easy-going instrumental, weirdly at odds with its name. These songs have sat in the can for over 40 years and were all-but-forgotten--until Death, the band that RockFire had morphed into, issued the 2009 set of recordings from 1974 ...For the Whole World to See, becoming a cause-celebre in the punk community as early progenitors of the style. In conjunction with the release of the stellar A Band Called Death documentary film, Third Man is finally unleashing these songs, giving the Hackney Brothers David, Dannis and Bobby their due.

The SupremesButtered Pop Corn / Who's Lovin You