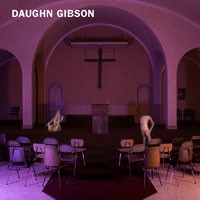 He first entered the daydreams of the general public in 2012 with his acclaimed debut, All Hell. Armed with modern technology and a pile of thrift-store records, Daughn shook the ghosts out of scratchy Christian folk records and baptized them as fierce Americana with his booming baritone voice.

It's on Daughn's second album and Sub Pop debut, Me Moan, that he truly reveals himself to the world. If All Hell was a gritty black-and-white movie, Me Moan is a widescreen IMAX 3D extravaganza. While the roots of All Hell’s sample-based music remain, these songs are performed live, lushly detailed and richly orchestrated. Live drums, guitars (by John Baizley of Baroness and Jim Elkington of Brokeback), pedal steel, horns, house strings, bagpipes and organs appear on this record,

Like Cormac McCarthy or Robert Altman, Daughn Gibson is a uniquely American artist who throws his soul into his work, free of compromise, possessed by unique vision and so damn intense that he constantly teeters on spontaneous combustion. It's not out of line to consider Me Moan as his Blood Meridian; his Nashville. All that's left is for you to let Daughn in.