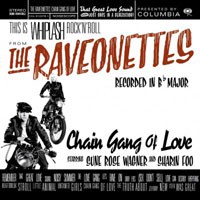 'Chain Gang Of Love', originally released in August 2003, is The Raveonettes' first full length album after they debuted with the critically acclaimed 'Whip It On' mini album in 2002.

Their sound has often been compared with that of the noisy and distorted Jesus And Mary Chain, while the Velvet Underground and even the vocal harmonies of the Everly Brothers are never far away either. The most noticeable difference in sound between the debut EP, which had all songs in B-flat minor, and this album is that here all songs are in B-flat major. The result is an album drenched in an uplifting fifties and sixties sound.

Because of this wall of sound you might expect a Phil Spector production, but Sune Rose Wagner himself (one half of the Danish duo which is The Raveonettes) and Richard Gottehrer (producer for a.o. Blondie and The Go-Go's, and founder of Sire Records) were responsible for this remarkable and uplifting release.

The White StripesLet's Shake Hands / Look Me Over Closely