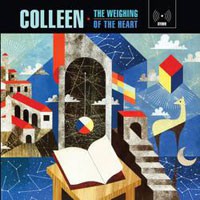 Five years after her previous widely - acclaimed album, 'Les Ondes Silencieuses', Cécile Schott (aka Colleen), returns with a stunning new opus maximus, 'The Weighing of the Heart' - her first for Second Language.

Singing for the first time on record, and to dazzling, numinous effect, the dexterous Spain-based Frenchwoman deploys violas da gamba, guitar, woodwind and Moondog-inspired percussion across a litany of finely wrought tableaux vivant songs. The combined influences of Arthur Russell, Moondog, Brigitte Fontaine and the musics of the African continent loom large in her new work, an absorbing fusion of the delicately spun and the rhythmically persuasive, embracing a pastoralism that is both lyrical yet rooted to the earth; at once hazily baroque yet accessible and universal.

Colleen has released three albums on The Leaf Label, and also released a live recording in the Mort Aux Vaches series on Staalplaat in 2006, and an EP made entirely with music boxes (the result of a commission by national French radio station France Culture) in October of that year. In 2007 she also completed her first dance score for Franco-Swiss choreographer and dancer Perrine Valli.

Both the CD and 180gram vinyl are packaged in beautiful artwork by the renowned Italian illustrator, Iker Spozio. The gatefold vinyl includes a free mp3 download code of all the tracks from the album plus an 8 page lyric booklet. The CD is the 4th in the highly-collectible Second Language Library Series - beautifully designed CD albums in hardback book - style packaging.