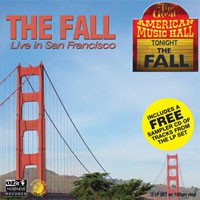 After what seemed like a very long, drunken, tense-with-anticipation waiting period, the moment is upon me. The band takes the stage, and immediately launches into a big-sounding version of The Joke. Mark bounds onto the stage and starts bellowing into the mic with intensity: "The Joke! Five years in a PC camp, the Joke!" "Ahh," I think, "they're not going to totally suck." This latest incarnation of the Fall includes three hard-working lads named Ben, Spencer, and Jim, who know their shit something fierce. This is an incredibly tight band that is gaining momentum at the expense of every amateurish musician ever to mistakenly step onto the stage. Mr. Smith himself was in fine form, prowling around the stage snarling lyrics into the mic and messing around with his bandmates' amps (but not too much - I have to stress that his behavior was fairly clean on this tour). He seemed to be on something besides straight-up "joie de vivre," but that is hardly an aberration. This man and his friends like to do drugs, and have done since the early days of the band in 1977. Whatever, it's rock and roll. What matters is the music, which was strong. The band was a juggernaut with a mad genius at the helm. Picture a massive battleship with wheels rolling over small towns with a mad banshee snarling and hurning invective down at those foolish enough to stand in the way. Mark E. Smith is an incredibly self-assured performer who exudes more charisma standing still than most lead singers do hopping around and climbing on things. The biggest stormer of the evening was "I Am Damo Suzuki," MES' tribute to one of his favorite bands, Can. One of the first lyrics, "and the drums....come in...and the drums they come in FAST" sent shivers down my spine as the drummer started bashing out the catchier-than-strep beat. In general, the set got faster, louder, and generally "more" towards the end. I think it was during the cover "Mr. Pharmacist" that the energy really started picking up. "Two Librans" off of the Unutterable was also pretty powerful--both because the massive guitar chord hook style of these songs suits the new band pretty well. So now for the $64 million question: are the Fall over? Even worse, were they over a long time ago? The answer, to anyone who is still paying attention, is resoundingly no. This band can fill the GAMH with people going nuts. They are a monument, but unlike other monuments, they continue to create. As Smith once barked, "Ours is not to look back, ours is to continue the crap!" Indeed.