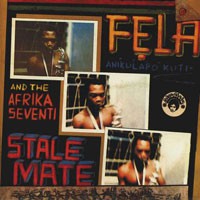 Although the original liner notes report that Stalemate was "recorded during the Kalakuta crisis," the album is surprisingly non-confrontational. Modern day notes explain that the singer was distracted by a number of outside issues, such as his sudden homelessness and legal battles with Decca West Africa, but the album's decidedly lighthearted tone is perhaps an attempt to demonstrate to his oppressors that Kuti had escaped the Kalakuta conflict with his health and determination intact. "Stalemate" is a slice-of-life song depicting everyday situations where two groups of people are at odds with each other; "Don't Worry About My Mouth O (African Message)" finds Kuti as a schoolmaster teaching his students to reject Western toothbrushes and toilet paper in favor of traditional African chewing sticks and water. Fear Not for Man is less about message and more about grooves, with the title track preaching briefly about the importance of being courageous before embarking on an extended instrumental jam. One of the more peculiar tracks in Kuti's catalog, "Palm Wine Sound" is a Caribbean-styled instrumental that finishes the album in the high-life spirit of carefree fun and dancing.