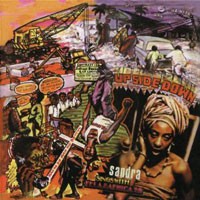 These albums provide answers to the question, "What would Fela Kuti's band sound like with someone else singing?" The title track of 1976's Up Side Down was written for the voice of Sandra Isodore, the woman who had introduced Fela to the Black Panthers seven years before. It's one of his greatest songs, a slinky 15-minute funk jam with an irresistible riff and a sly lyric about Pan-African disorganization. Fela coupled it with a remake of his earlier "Go Slow," a low-grooving complaint about traffic jams in Lagos. Music of Many Colours is a 1980 collaboration between Fela and American vibraphonist Roy Ayers, who wrote and sings the jazzy "2000 Blacks Got to Be Free," a vision of a black-unity future that's the closest Africa 70 ever came to making a disco record. Its companion piece, Fela's "Africa Centre of the World," is more straightforward midtempo Afro-beat, with multiple percussionists pattering against Ayers's chiming, improvisational vibes.