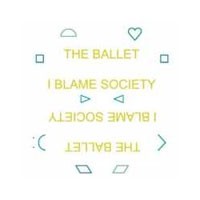 I Blame Society is the third album from New York trio The Ballet and their first for new label Fortuna POP! Unashamedly “sissy” and explicitly queer, The Ballet marry the DIY queer ethos of the Hidden Cameras with the wry poeticism of The Magnetic Fields to create literate, infectious pop gems.

I Blame Society is a continuation of the lyrical themes and songwriting style found in the band’s two previous self-released albums (Mattachine! [2006] and Bear Life! [2009]), though with slightly pared down arrangements and a nuanced production, which highlights songwriter Greg Goldberg’s strengths. Inspired by Stephin Merritt’s body of work, Goldberg draws from an array of pop artists and periods, from 60’s bubblegum to 80’s synthpop and 90’s indiepop, fusing these in sophisticated and novel ways which rewards repeat listening.

Avoiding autobiographical or confessional modes, Goldberg nonetheless mines his own psychological constitution and intellectual interests to craft songs whose overt musical prettiness is often contrasted by a dark and complex subtext. I Blame Society addresses a number of queer themes, offering a nuanced and refreshing perspective on contemporary queer issues, subtly balancing queer melancholy with self-deprecating humour and stubborn utopianism. While some queer musicians shy away from articulating a connection between their sexuality and musicianship, The Ballet have often contended the opposite: that they are “a bunch of queers who just happen to be in a band.”

Formed in 2005 by Greg Goldberg and Craig Willse (who are both professors and met whilst at graduate school) with Marina Miranda (who they met at a party), The Ballet are still going strong after eight years of pop magic, retaining their original line-up. That’s not to say they haven’t gone through some line-up changes over the years. Acquired bandmates Ginger Brooks Takahashi and Michael O'Neill left in 2007 to join JD Sampson in MEN. Indiepop luminaries such as Linton from The Aislers Set and Ramesh from Voxtrot have also made guest appearances on previous albums, as have Kaki King and Scott Matthew.

1 Alright
2 Cruel Path
3 Difficult Situations
4 Feelings
5 Meaningless
6 Too Much Time
7 Is Anybody Out There?
8 Turn You
9 Sorry
10 All The Way