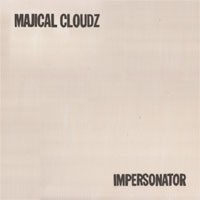 Majical Cloudz is the voice of Montreal songwriter Devon Welsh, exploring the negative space within electronic music, using his powerful vocals to say “no” to the infinite possibilities digital instruments provide and instead choosing to focus his attention inwardly.

Joined by Matthew Otto to collaboratively produce and perform his songs, the 2012 debut album ‘II’ and the ‘Turns Turns Turns’ EP released on Arbutus / Merok in December gained praise for their simplicity and honestly. Now, ‘Impersonator’ brings Welsh’s songs into even sharper focus as the expressive power and swagger belie the extremely minimal music. These are intensely lyrical songs about death, patience, family, friendship and desire, with Welsh’s rich vocals atop quiet looped waves of white noise, filtered synths and sparse thuds.

Welsh expounds on how he came to his personal, minimal brand of electronic music: “In the last few years there’s been a massive explosion of amazing music made with electronic equipment. I love that kind of music but it also started to overwhelm me, I wasn’t cut out for the maximalist expressions of that style. So I took a break from music, and when I started again it was to make music that barely existed and felt like stillness more than movement. Where the songs could be more about humanness. The easiest way for me to do that is try to make something without obvious movement; where the music isn’t overstuffed sonically or referentially, it’s emptied out as much as possible. So the vision for ‘Impersonator’ was to communicate a lot with as little as possible. It’s not meant to energize and turn you out to the world, it’s meant to do the opposite; it’s more like a cocoon.”

Most of ‘Impersonator’ was written at Welsh’s father’s house in rural Ontario, in the basement after he went to sleep. He says, “One day I realized I had fifteen to twenty songs, and they made me feel like I had overcome the dead end I thought I was in. I started realizing that I could say anything I want in a song.”

While Welsh and Otto work collaboratively in the studio, live Welsh is front and centre on the mic, as Otto creates the musical atmosphere. “I put forward songs and big ideas, and he pushes me to look at the little details,” says Welsh. “Live it’s a similar dynamic, he gives me the platform to stand on musically.” The songs are made with relatively low-tech means, allowing for spontaneity and experimentation, both live and in-studio. For Welsh, the track ‘This Is Magic’ works as a metaphor for the album as a whole: “That song functions with very minimal arrangements, very straightforward lyrics, it operates on a loop, and the message is that there is strength, rather than weakness, in being vulnerable.”

Though they stand stylistically apart from other artists in their Montreal scene - which includes Grimes, Doldrums, Blue Hawaii, Mac DeMarco, and others - Majical Cloudz are proud beneficiaries of its camaraderie. “The waves that are being made internationally by Montreal musicians really started in the fall of 2009, so the fact that it is finally happening is unbelievable and I’m euphoric about it,” says Welsh. “I don’t think I could find an art / music scene as rewarding to me anywhere else, because it takes a while to get comfortable being vulnerable in front of a whole community.”