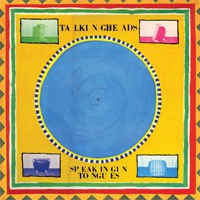 Released in 1983, ‘Speaking In Tongues’ was the band’s fifth studio album and became their commercial breakthrough, featuring the track that earned them their first US top 10 hit ‘Burning Down the House’, and the classic Talking Heads tracks ‘Girlfriend Is Better’, Slippery People’ and ‘This Must Be The Place’.

David says: Talking Heads couldn't be from anywhere other than NYC. An alien band from an alien land, this album has, in the mutoid disco funk of 'Slippery People', the Parliament inspired 'Burning Down The House' and everyone's favourite Talking Heads song, 'This Must Be The Place', three of the best songs ever written.