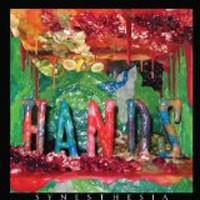 Building off the success of their 'Massive Context EP' (Small Plates) released in 2012 and a 7" released on White Iris in January, songs like "Videolove" and "Trouble" show Hands’ innate ability to blend instruments and electronics into a deep texture that moves ethereally through genres. Hands moves from rock to synth-pop to skyrocketing stadium anthem, often within the same song.

The band made a mark on the scene immediately, quickly playing packed shows across the USA including stops at SXSW, CMJ and Deluna Fest, headlining Echo Park Rising, sessions with Daytrotter, and a west coast jaunt with Maps and Atlases.

Hands’ ability to win over fans with their feverish live show and dance-party ready sound has already earned them opening spots for the likes of Deerhoof, DeVotchKa, Foster the People, and Kimbra as well as playing shows to sold out crowds at venues across LA.

"The band blends thumping bass, esoteric guitar riffs, frenetic drumming and soaring, looping vocals to get staid indie rockers moving." - Time "If you’re a fan of Hot Chip or Tanlines, this is your band to follow in 2013." - Stereogum