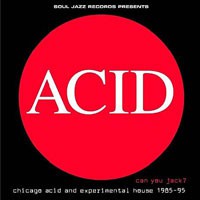 Soul Jazz Records re-release "Acid: Can You Jack?", a double CD and two DJ-friendly super loud vinyl double packs presenting the definitive guide to the evolution of house and acid in Chicago. The album traces how the sound developed as clubs like Ron Hardy's legendary Music Box and Frankie Knuckles' Warehouse, along with radio mixes by the Hot Mix Five, put Chicago on the map. The album features all-time classic tracks such as Phuture's epic 12 minute "Acid Trax" and Sleezy D's "I've Lost Control" alongside many rare and experimental tracks such as Lil Louis's "Video Clash" and Marshall Jefferson's "Go Wild Rhythm Tracks". With sleevenotes by Tim Lawrence (who wrote "Love Saves The Day"), exclusive photos and interviews with Marshall Jefferson, Adonis, Tyree and more, the album shows how Chicago's unique culture and artists led to some of the most important music ever made.