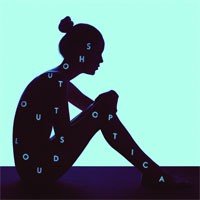 Following their 2010 album Work, Adam, Bebban, Ted, Carl, and Eric headed out on their most successful tour ever and then returned home to their own pursuits. Families were expanded, side projects were launched, and homes outside of Stockholm were explored. When the time came to work on another Shout Out Louds record they wanted to return to the playful spirit that first brought them together ten years ago. Instead of “work,” they wanted to dance! Rather than rehearsing and then recording in the studio as they’d always done, everyone felt free to write and work on their own parts individually as Optica was taking shape. Also, the band worked with a string composer to achieve lush arrangements described by Carl as “Disney on drugs” and by Adam as “like warm mayonnaise.” Shout Out Louds took their time with these songs, recording for about 1.5 years in a small Stockholm studio and producing themselves for the first time with help from Johannes Berglund. A theme emerged and Optica was born, an album celebrating color and light from a band confident in its sound.

“The forthcoming album is stacked full of the usual anthemic qualities we’ve come to expect from the group, whilst the quality of songwriting and production takes another bold step towards eternal greatness.” The Line of Best Fit

NOTE: Track 11 Is Not Included On The Physical LP, But It Is Included As Track 11 (of The Full 12 Tracks) On The MP3 Coupon.