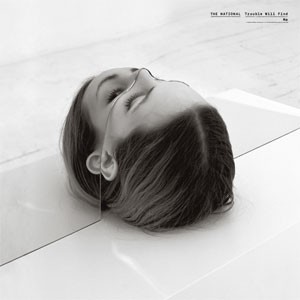 This is the sixth studio album for the Brooklyn band, and follows 2010’s High Violet, which was No 2 in our Albums of The Year, that year.

In an interview with UK’s Uncut Magazine, front man Matt Berninger described the songs as more “immediate and visceral” than their previous work. Trouble Will Find Me possesses a directness, a coherency and an approachability that suggests The National are at their most confident.

After a 22-month tour following the release of High Violet the band returned home. Regardless of plans to wait to record new music for another year or two, guitarist Aaron Dessner began working on sketches of new songs that the other members were too inspired by to not fully realise. Matt confesses, “For the past ten years we’d been chasing something, wanting to prove something. And this chase was about trying to disprove our own insecurities. After touring High Violet, I think we felt like we’d finally gotten there. Now we could relax—not in terms of our own expectations but we didn’t have to prove our identity any longer.” The results are simultaneously breakthrough and oddly familiar, the culmination of an artistic journey that has led The National both to a new crest and, somehow, back to their beginnings—when, says Aaron, “our ideas would immediately click with each other. It’s free-wheeling again. The songs on one level are our most complex, and on another they’re our most simple and human. It just feels like we’ve embraced the chemistry we have.” The album was recorded at Clubhouse in Rhinebeck, NY. Trouble Will Find Me was self-produced and mixed by Craig Silvey with additional mixing from Peter Katis and Marcus Paquin.

Laura says: With every album The National have pushed on and made a more ambitious album, constantly upping the ante with bigger arrangements and a bigger sound. So how on earth were the going to follow High Violet?
Well, it seems they’ve finally come to terms with who and where they are as a band and made an album that reflects that. The Dressner brothers intricate arrangements are still there, as are the distinctive scatter-shot drum patterns (described perfectly by film director DA Pennebaker as “like rain falling through the leaves of a tree”) and of course Matt Berninger’s rich baritone rolls effortlessly over it all, but “Trouble Will Find Me” is a more relaxed, streamlined collection, and this stripping back gives the songs room to breathe and emphasises just how good they are at what they do. There may be less angst here than in the past, but the romanticism and melancholy are still there and for me, once again they've come up with one of the best albums of the year.