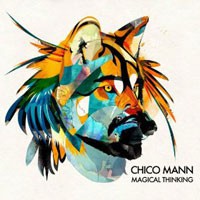 Displaying his mastery over an arsenal of studio weapons and synthesizers, Chico Mann (aka Marcos Garcia) scores his fifth long player against a backdrop of pop sensibilities and guest vocalists. The album draws as much on 80's funk, boogie and electro as merengue and Afro-beat.

A member of Antibalas, multi instrumentalist and guitarist, Garcia has in the past worked with the likes of TV On The Radio, The Roots and Dam-Funk as well as remixing Little Dragon and Alice Russell.

His most recent LP 'Analog Drift' (2010) was released through Wax Poetics Records, an album that he toured throughout the US. Jon Pareles (NY Times) praised his live show's "far-reaching electronica" that had the ability "to dissolve decades, along with borders".

Where previous Chico Mann material drew heavily on his Afro-beat roots, his upcoming LP 'Magical Thinking' taps in to a new vein of thinking, where the 80s funk, boogie and electro sounds of New York and Miami dominate the sonic landscape. Featuring a selection of guest vocalists, and mixed by Brooklyn producer / musician Jeremy Page (That Handsome Devil), 'Magical Thinking' is Chico Mann's most ambitious and accomplished project to date.