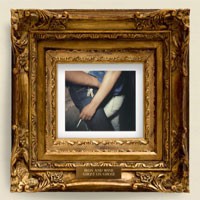 Following 2011’s ‘Kiss Each Other Clean’, which debuted at number two on the US Billboard chart, ‘Ghost On Ghost’ is to be the fifth studio album from Austin-based Sam Beam.

While Rolling Stone said of ‘Kiss Each Other Clean’ that “pop music hadn’t seen anything like it since the heyday of Cat Stevens,” and Pitchfork said it “more closely resembles the lush, gold-toned singer songwriter records of the late 60s and early 70s - ‘Astral Weeks’, ‘Goodbye Yellow Brick Road’”, Beam felt it time to move from what he called the “anxious tension” from this record and his previous one (‘The Shepherd’s Dog’). “This record felt like a reward to myself after the way I went about making the last few,” he says.

For the album’s cover, Beam, who is also a visual artist, chose an image from the series ‘Private Views’ by noted photographer Barbara Crane.