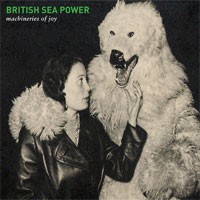 British Sea Power’s new, fifth album ‘Machineries Of Joy’ will be released on Rough Trade Records. The album release will be accompanied by a full UK tour.

‘Machineries Of Joy’ was written in the Berwyn mountains in north Wales and recorded in Brighton with Dan Smith and mixer Ken Thomas (David Bowie, Sigur Ros).