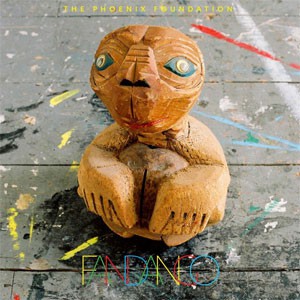 Fandango is the follow up to The Phoenix Foundation’s 2011 album Buffalo. Having made their reputation in New Zealand, Buffalo, their fourth album and the first to be released in Europe, was a critical and commercial hit, and 2011 saw sold out shows across the UK, with a storming set at Glastonbury leading to their UK TV debut on ‘Later... with Jools Holland’.
Fandango, an expansive, ambitious and gloriously rich 78 minutes, was recorded at four studios over 15-months. From opener ‘Black Mould’ (perhaps the first motorik-influenced song about respiratory problems induced by inadequate building standards in New Zealand) to the 18 minute closing behemoth ‘Friendly Society’ (almost certainly the only psychedelic epic named after the Quaker movement and which features Neil Finn and Bella Union signed Lawrence Arabia on backing vocals), Fandango is un-coy about its lofty ambitions in an age of digital disposability.

The album draws on the band’s collective love of the rock canon (Dr John, Black Sabbath, The Carpenters, Can, Talk TalK, ELO, Television,), but also from some of music’s more obscure corners (Harmonia, The Clean, Aphrodite's Child, Erkin Koray, Baris Manco, Georges Zamfir, Hayao Miyazaki). Check the balladeering yacht rock of ‘Sideways Glance’, the end-of-the-party psych-folk of ‘Modern Rock’, and ‘The Captain’ a 3-minute slice of melancholic melodic joy featuring the vocal talents of co-frontman Lukasz Buda. ‘Thames Soup’ finds the band stretching the pop tropes of mid 70s FM radio to near breaking point while ‘Evolution Did’ channels Sly and Robbie production into an oblique rant on creationism.

The band recorded Fandango partially at Neil Finn’s Roundhead studios, partially at a barn in the depths of the New Zealand countryside (in the middle of winter, fire blazing in the recording studio, cardigans on) but mostly at the band’s own HQ, The Car Club in Wellington. The album was then mixed with the assistance of long-term associate Lee Prebble at The Surgery (earthquake warnings taped to the front door). Lee and the band mined the depths of vintage studio effects in a quest to create new aural chimera.

"Damn the zeitgeist, I still rejoice in the pan-sexual opulence of a double gate-fold vinyl album. Honestly, I'm thoroughly satisfied that we have made 80 minutes of tripped-out pop oddities that pays absolutely no attention to the short form game of contemporary music. This is Test Match music - maybe it's prog or psyche-folk - whatever it is, it's music that we thought about a lot, worked on a lot and cared about in the minutiae."

Andy says: Phoenix Foundation stretch out in a glorious way. Deep and lush!

CD Tracklisting:
A1. Black Mould
A2. Modern Rock
A3. The Captain
A4. Thames Soup
A5. Evolution Did
A6. Inside Me Dead
A7. Corale

B1. Supernatural
B2. Walls
B3. Morning Riff
B4. Sideways Glance
B5. Friendly Society

LP Tracklisting:
A1. Black Mould
A2. Modern Rock
A3. The Captain
A4. Thames Soup

B1. Evolution Did
B2. Inside Me Dead
B3. Corale