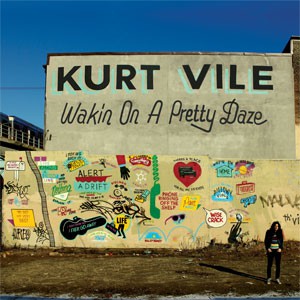 Five and a half minutes into ‘Was All Talk’, the third track off his new album Wakin On A Pretty Daze, Kurt Vile murmurs in his beatific, laconic burr, “Makin’ music is easy / Watch me”. If that sounds like an empty boast it’s likely you’ve just not listened to enough of Vile’s music yet, as the way Kurt’s songs fall into place suggests that his art is entirely and convincingly effortless. That these songs zero in on a hazy perfection with such laser-guided precision shows that behind this veneer of lackadaisical creativity, beavers a songwriter toiling hard to make music so beguilingly laid-back.

Kurt Vile (his real name) is one of ten children, born in 1980 and raised in the city of brotherly love, Philadelphia. As a teenager, his bluegrass-lovin’ father gifted him a banjo, when what Kurt truly craved was a guitar. So, with a ‘can do’ spirit that’s a boon to any independent musician, he simply played it as if it were a guitar. Along with his passion for the 4-track-toting titans of early 90’s indie-rock, Vile also harboured a love for classic rock of substance – Creedence, Tom Petty, Neil Young, artists with their roots in ‘Roots’, but with enough vision to carve out an Americana of their own. Within the footprints he was following, Vile began carving a path of his own, making an art of dipping from introspective mellow rambles, to sky-scraping anthems; eager to rock out, equally unafraid to sing low and sweet.

Fast-forward some years and with The Violators in tow (the Heartbreakers to his Tom Petty, if you will) barnstormers like ‘Freak Train’ from the full-length Childish Prodigy [2009] were contrasted with more reflective and sun-dappled tunes from his break-through album Smoke Ring For My Halo [2011], as Kurt quietly became one of the great American guitarists and songwriters of our time.

Wakin On A Pretty Daze, Vile’s fifth full-length, is an album that builds on all Kurt has done before, that makes sense of the supposedly contrary impulses of his previous work. Learning whilst ascending, he’s crafted an album that would have sounded great 30 years ago, sounds great today and will still sound great 30 years from now.

Realising he’s in no rush to prove anything to anyone, songs on Wakin On A Pretty Daze unfurl at their own extended and unhurried pace, but not a second of this loveliness is wasted or surplus. The likes of ‘Air Bud’, ‘Was All Talk’ and ‘Gold Tone’ could keep on ringing out, exploring every possible wrinkle in its chord sequences and expounding with wisdom on the simple pleasures of a beautiful day, for as long as Kurt could stand to play them. These aren’t jams; these are songs that glide as they unwind, with a natural charm that’s enough to convince you that, yes, for Kurt, Makin’ music is easy. So, seriously: Watch him.