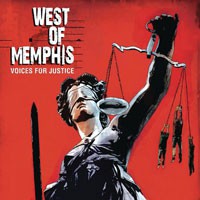 In 1993 the world was startled by the horror story of the murder of three 8-year old boys near Memphis, Tennessee. Three local teenagers were arrested and given life sentences, one of them was to be executed. Then in 2011, after a tireless campaign involving rock stars, movie actors and supporters from the public the three were released. These famous people all contributed to create awareness and prove the innocence of the three convicted men. Famed movie director Peter Jackson decided to shoot a documentary on the subject, called West Of Memphis: Voices For Justice. Amongst others, Pearl Jam’s Eddie Vedder and Patti Smith used their songs for various benefit activities for the case. Johnny Depp’s version of Little Lion Man, as well as all the other songs on the soundtrack, played an important role in the life of prime suspect Damien Echols whose innocence was proven in 2011. After eighteen years in prison he declared: “Music has always played a huge role in my life. In my early years it allowed me to escape the crushing poverty I was born into. Then, when I was put on trial, it was music they used against me. My love of heavy metal was considered ‘proof’ that I was evil and a satanic murderer. And then, ultimately, it was music that helped to free me” said Damien Echols.