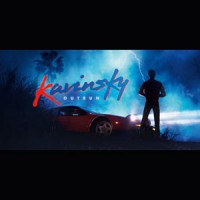 With ‘Nightcall’ used on the Drive soundtrack, the buzz surrounding Kavinsky is massive. On the back of 30 million Youtube views for the track, Record Makers bring us his long-awaited debut album. The album features 13 tracks including eight previously unreleased cuts and some reworks. From the first notes, we can hear Paul Hahn (manager of Daft Punk) recounting an introduction to the adventures of Kavinsky. Warm and electric, ‘Blizzard’ makes its entrance and sets the tone before allowing ‘Protovision’ to take its place, which with its nervous and synthetic melody was the first excerpt of ‘Outrun’. Next we get ‘Odd Look’, the first vocal song on the record, which unveils a mysterious funky voice reminiscent of Marvin Gaye or Prince. It’s then ‘Rampage’‘s turn to take us with its menacing orchestral atmosphere; after what comes the persuasive beat of ‘Suburbia’ on which the notorious Havoc from Mobb Deep lends his mic skills. The upgraded version of ‘Testarossa Autodrive’ confirms the efficiency of this unstoppable melody. Big hitter ‘Nightcall’ is next, produced by Guy-Manuel from Daft Punk and featuring Lovefoxxx from CSS. ‘Dead Cruiser’ arrives all muscled yet melancholic, followed by ‘Grand Canyon’ which takes us with its electric ritournelle. The voice of Tyson, the new electro-funk revelation from the UK, transforms the instrumental ‘First Blood’ into a cut with genuine hit potential. The rhythmic and melodious ‘Road Game’ leads us to ‘Endless’, which gently closes this long-awaited debut along with narrated epilogue by Paul Hahn again.

A1: Prelude
A2: Blizzard
A3: ProtoVision
A4: Odd Look
A5: Rampage
A6: Suburbia
A7: Testarossa Autodrive
B1: Nightcall
B2: Deadcruiser
B3: Grand Canyon
B4: First Blood
B5: Roadgame
B6: Endless