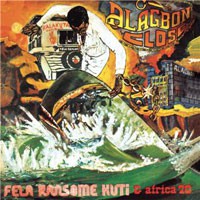 Though preceded by the more-than-promising Gentleman and Afrodisiac in 1973, 'Alagbon Close', with the benefit of hindsight, marks a quantum leap for Kuti, Allen and Afro-beat. Most of the elements which make the disc so compelling can be heard on earlier albums, but on 'Alagbon Close' Kuti and Tony Allen pull them all together to devastating effect, in the process creating the definitive Afrobeat paradigm.

Africa 70 plays with unprecedented fire: the four-piece horn section was never more majestic; the nagging riffs and ostinatos of the tenor and rhythm guitars never more insistent. Allen is a lithe-limbed colossus, his soon-to-be signature rhythms at times pushing the band forward with extraordinary percussive power, at others drawing it back like a coiled spring, only to unleash it again. Three conga drummers support him. Kuti's screaming multi-octave glissandos on the organ climax an incantatory solo, and the track's concluding drums and horns passage is Africa 70 at its most epic.

'Why Black Man Dey Suffer' is a more formative affair. It's one of a series of early 1970s' albums which made the transition between the highlife and jazz blend of Kuti and Allen's first band, Koola Lobitos, and the turbulent magnificence of mature Afrobeat. Trumpeter Tunde Williams, baritone saxophonist Lekan Animashaun and first conga player Henry Kofi, from later line-ups including that on Alagbon Close, are also in place.