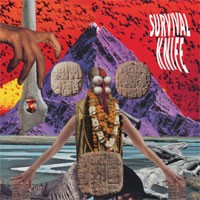 Survival Knife hail from Olympia, WA, and this is their first release (if you don’t count a soundboard recording of their first show that has been gathering praise all over the internet).

The band, which features two of the three founding members of Northwest legends Unwound, pull together elements of Drive Like Jehu / Hot Snakes, Black Flag’s mid-period mathematical lurch, King Crimson and, of course, Unwound, for a taut and catchy post-hardcore crunch.

Since their live debut in March 2012, they have shared stages with the likes of METZ, Bitch Magnet, Kinski and Hungry Ghost.

Traces Of Me
Name That Tune