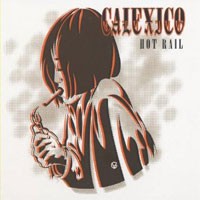 In 2000 the Tucson band released their second album proper and further refined their desert noir soundscapes. On this album Calexico opted for a more intimate form of expression, for a stylish, sombre, bleak ballad style that is often drenched in psychedelic reverbs and accented by jazz instruments.

Then again it does contain their first forays into the semi pop song with The Ballad Of Cable Hogue and eventually it was reissued with a version of "Crystal Frontier" that had quickly become a live favourite and went on to become their first pan European radio hit and calling card.