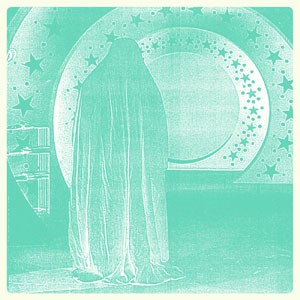 For a while now Leeds five-piece Hookworms have been terrorising headlining bands across northern England and beyond, not through histrionics or gimmick, but through sheer sonic velocity and emotive intent. Often bracketed among the latest wave of psychedelic rock currently appearing in pockets around the UK (as support slots with Wooden Shjips, Sun Araw and Peaking Lights attest), this tag is somewhat of a misnomer for a band whose use of repetition and reverb is not to open the third dimension or for some sort of flower-power escapism. Instead the reel feels cathartic, each fresh revolution of the loop a confrontation between the band and themes of depression, loss and anger - subjects close to the heart of the group’s vocalist MJ (“no enigma; we just don’t use our full names, we’ve no interest in being celebrities.”)

‘Pearl Mystic’ was recorded and produced in MJ’s own Suburban Studios – where he’s worked on records for Mazes, Eagulls and Spectrals among others – and he admits he enjoyed the greater freedom he could allow himself on his own project. The album is an absolutely thunderous statement of intent for Hookworms (MJ – vox/keys/analogues; JW – guitarist, SS – guitarist; MB – bass; JN – drums) after a portentous couple of years of live shows and limited releases (a debut self-titled EP on Sun Araw’s Sun Ark label, a 7” Gringo Records all sold out quickly). Whilst their live shows continued to increase in intensity, with impressive festival appearances at Beacons, Liverpool PsychFest and Supersonic cementing their reputation treading the boards. Live and on record, like Spaceman 3, they pointedly subvert the tripped out sound environments of psychedelia with a darkly malevolent punk menace; unlike J.Spaceman et al, there’s no chemical assistance, these concepts and feelings come with clarity, and hit all the harder for it.

Indeed, the most impressive thing about Hookworms is that, through this torrent of emotion, through their wild motorik and their thick slabs of noise that threaten to spill over, there’s always the sense that they’re in control of it all, so committed are they to this catharsis that they refuse to throw any of it to chance. And so they shouldn’t, because even at this early stage we think Pearl Mystic will be one of the albums of 2013.

Darryl says: Having built up a large following with their famously intense live sets, supporting and indeed blowing off stage many of the psych glitterati, Hookworms, a five-piece from Leeds who prefer to be known by initials only, bring us their debut full-length. Throughout the album’s nine tracks the ferocity of their live gigs has been superbly replicated with a self-production that keeps the sound just on the right side of raw. The album kicks into life with singer MJ’s rousing echo-blitzed scream of “Come On” on album opener “Away / Towards”, and the band respond with a sonic velocity that’ll have your nasal hairs quivering. What follows highlights the dark malevolent menace at the heart of ‘Pearl Mystic’: distorted wah-wah guitars clash with huge swirling organ noise and barely intelligible echo-swamped vocals, all propelled along by a wicked motorik groove. Akin to Spacemen 3 or Loop in their pomp, this is one of the best UK psych / space rock albums in years.