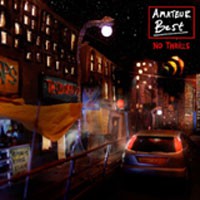 No Thrills is the proper debut record of Joe Flory. It's been a long time coming from a man we now know as Amateur Best and some may remember as Primary 1. The music is autobiographical, romantic and undeniably poppy. Indeed, he describes his songwriting as primarily informed by a lifelong fascination with pop music, from early encounters with Michael Jackson cassettes when he was growing up in Singapore, to discovering the more inventive strains of pop we've been spoiled with over the past decade.

Flory describes his connection to pop as an intensely personal one too. Back in Singapore it helped shaped his relationship with music and even his own identity as Flory found himself obsessing over a British pop scene that was happening 6000 miles away. He never saw those favourites live, instead cherishing the recordings and using them to stay in touch with the country he came from.

Not that this relationship has always been cosy. The Amateur Best project itself was born partly from Flory's own frustration with the form. After an aborted attempt at making a pop album for a major label as Primary 1 he had lost all interest in making music. So instead of writing songs Flory decided to start documenting his thoughts in a series of online comics. Those strange, quirky comics were eventually released alongside 7" singles on London label Double Denim and became something of a healing process. In Joe's words "I wanted to see if I could make a story that was fictional, but reflected some of my own experiences. What's brilliant about doing something I am a total amateur at is that a lot of subconscious things come out in a very pure way". Those violent, funny and disarming comics helped Flory re-think the music. No Thrills isn't a concept album but the energy and passion spent on the comics certainly helped inspire and drive the music to the point reached on the debut Amateur Best record.

Considering its genesis the record could easily have been a hard luck story but Flory sees it as a very positive album and an honest one too. He describes it as "about growing up and losing a lot of my dreams, but in the process also losing a lot of my illusions too. A lot of my romantic notions about love and life have been stripped over the past couple of years, but what I'm left with are things I really care about".

The smart, inventive pop music of No Thrills is testament to the fun Flory had rediscovering his muse. From the squeaking saxophone that proceeds the gorgeous, lilting melodies in Too Much (featuring Nick Hunt of Outfit on guitar) to the bouncy, cartoon pop of Pleased. There are darker patches, but even the record's most depressed moment Get Down sounds like it takes place on a fairground ride.

A few friends helped out too, including Chilly Gonzales, who appears on Ready For The Good Life. Flory had played drums for Gonzales live and they were hanging out in Paris listening to some of Chilly's new material. He describes the collaboration as almost instantaneous from there: "I played Ready for the Good Life to Chilly and asked if he could try some chords over it. He literally turned back to the piano, pressed record and did two takes. I used both of them."

The release of No Thrills on Double Denim Records marks an end and a beginning for Flory. It's the album he felt he'd been making in his head for years but sees its release as the start of something even bigger and more exciting. Each of his short comic books came labelled as chapters, and while No Thrills has no such attendum it's hard not to think of it as the first of many more to come from a supremely gifted songwriter and story-teller.

Peoples PleasureDreaming Our Lives Away / A Feeling Inside