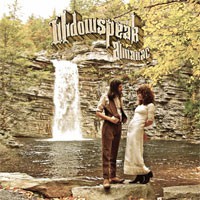 Widowspeak is an American band comprised of Molly Hamilton and Robert Earl Thomas, known for its dreamy, western-tinged take on rock and roll. Their self-titled debut was praised for its reverential spaciousness (no. 10 in the Piccadilly End Of Year Chart 2011), Hamilton’s haunting voice, and Thomas’s sinister Morricone-esque guitar lines.

On their second album, Almanac, the duo explores denser arrangements and new sonic territory, from Saharan rhythms to Appalachian-inspired melodies, all delivered with stoic, wistful restraint. Named after those annual tomes which provide agricultural advice, chart weather patterns and astronomocal phenomena, Almanac likewise tracks the life and death of seasons, youth, love, and the cyclical nature of all things.

The album was recorded by Kevin McMahon (Swans, Real Estate) in a hundred year old barn in the Hudson River Valley of New York State during the transition from summer to fall. Producing with McMahon, Thomas expanded on the band’s demos, crafting layers of guitar, Rhodes piano, organ and harmonium.