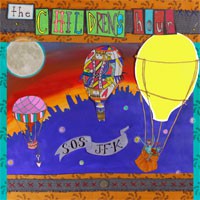 Fire Records will be reissuing SOS JFK , the one and only album from folk two-piece The Children’s Hour, which featured Josephine Foster and Andy Bar. Initially released in 2003, the album introduced audiences to Foster’s enchanting vocals and poetic folk, which would be developed to staggering effect in her later solo recordings, such as the recently released critically acclaimed album Blood Rushing (Fire Records). The Children’s Hour were an acoustic duo comprised of members Andy Bar and Josephine Foster. The two friends first connected in 2000 in a short-lived rock trio called Golden Egg, and then on a lark formed the pop song-writing duo oriented toward more naïve themes. Foster was a recent opera school dropout and the band became a vehicle for her to explore singing in a non-operatic manner into a microphone and learn to play the guitar. Bar was finishing studies at the Art Institute of Chicago and was honing a personal and highly melodic fingerpicking style inspired by bossa nova in particular. They were heard performing in a Chicago dive bar and given a surprise invitation to make a studio recording (SOS JFK), which both found to be an extremely nerve-wrecking learning experience. Meanwhile fans of their music rose up from unexpected corners, even invited by the band Zwan to open all the shows of both bands´ maiden tour. Initially conceived of as a modest front porch collaboration and side project, the band did not withstand all the attention long. Bar and Foster took meandering paths in diverse directions, although the two remain stalwart pals and both continue to dedicate themselves to the muses.