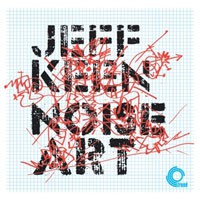 An album of unrelased music made by Jeff Keen, one of the UK's great avant garde artists. This is music found on cassettes in his studio after his death, was made by Jeff (throughout the 1980s) using field recordings from his local amusement arcade, the radio, the TV, films, an Atari, a ZX Spectrum, a delay unit and a WASP Synth. This is the first Jeff Keen album ever issued.

Jeff Keen is one of the great undoscovered artist of out times. A missing link between the DADAists, Cocteau, Warhol, Picasso, Jack Kilby and just about anyone else you can think of, Jeff made art every day of his life. Art seemed to explode from him, and he worked across all mediums with boundless creativity and very much his own style. He developed his own graphic, visual and speoken art language. The BFI have issued a 4 DVD set of his films. His collages and paintings are currently being exhibited in Brighton, New York and Paris. The Tate have started buying his work. He’s now dead and his stock is quickly rising. The music on this relase was made in and around the 1980s, using methods unique to him; in his ramshakle studio he’d have a mic, a radio, an Atari, a ZX Spectrum, a WASP synth, effects units and his own very ususual mind. He mixes field recordings with his very own language (“Bltazwurds”) and takes on the characters he developed over his artistic life.

This is very much an art / music release. The sound is a little like the industrial albums made in the late 1970s and 1980s, intense, odd, otherworldy, unpredictable. As a result, the vinyl is being pressed in limited numbers, unusual colours and comes in hand made packaging. Notes by Jonny Trunk, there is also an important essay by David Toop and recollections by Will Fowler of the BFI who worked closely with Keen.