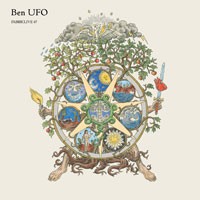 In a world where illegal downloads, cracked software and sync buttons are helping to create swarms of young DJs with bottomless libraries of digital music they’re vaguely familiar with, you might question the role and relevance of the specialist DJ in today’s musical landscape. Not everyone possesses the talent, care and breadth of taste required to project their personality through other people’s records, or to create narratives which transcend dancefloors; Ben UFO is someone who does. Over the years Ben has increased in confidence and proficiency, and in devoting himself to the pursuit of highlighting shared characteristics of 2-step garage, dubstep, classic house and techno, he has learned to expertly navigate and bridge tempos and genres in as natural a fashion as possible, allowing tracks from disparate areas to co-exist and function comfortably alongside one another to form a unique and well-defined aesthetic.

In 2007, after finishing university, alongside David Kennedy (Pearson Sound) and Kevin McAuley (Pangaea), he started Hessle Audio. The label was formed with the idea of providing a platform for the release of Pangaea and Pearson Sound’s own records, but its scope quickly expanded, resulting in the release of genre-defying records by Objekt, Untold, Cosmin TRG, James Blake, Blawan and more. In May 2009 they started their residency at Fabric, which has been ongoing ever since. The club night reflects what they do as a record label and as DJs, showcasing expansive, varied lineups and drawing connections between artists as diverse as Kassem Mosse, Kode 9, Livity Sound and Randall.

The primary purpose of this Fabriclive release is to represent exactly what Ben does as a DJ, and to give him the opportunity to showcase the different aspects of the music that he stands for. Accordingly, it is not a straightforward mix of house, bass music or techno; neither is it filled with exclusives or unreleased material. It is an indicator of where we are at and where we have come from, and a statement of intent. It is a considered and highly textured mix consisting of 28 tracks and traversing multiple styles.

Emerging from the moody introversion of Mix Mup’s “Before (Dub),” the mix starts in earnest with an aggressively distorted cut from Delroy Edwards, which bleeds into the off-kilter rhythms and sub-bass intensity of an exclusive from Pev & Kowton. From there we’re thrown into the bizarre future-tribal world of DJ Sotofett remixing Tim ‘Love’ Lee’s “The Tortoise” and onwards through tracks and decades, as Chicago Skyway’s “It’s OK” combines with K-Hand, Fluxion, Jam City, Pearson Sound and Mr. Fingers. There are truly inspired transitions here: the acid tones of “Zug Island” by Kyle Hall & Kero drip languidly over Shackleton vs Kasai Allstars’ “Mukuba Special”; the shattered percussion of A Made Up Sound’s “Malfunction” is pulled into line by the loop-driven techno of Grain’s “Untitled”; the dissonant bassline drone of Pangaea’s “Release” swallows up and consumes whole the kick-drum barrage which defines Blawan’s “And Both His Sons.”

With Hessle Audio releases represented heavily alongside labels such as L.I.E.S., Hinge Finger, Night Slugs, Hemlock and Eglo, there are clear indications of a tightly-knit community working collectively to push things forward. Ben is central to this movement, and with this mix he manages to communicate not just who he is and what he does, but ultimately where we are at.