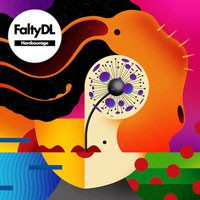 Welcome if you will, to the coming of age of FaltyDL, AKA Drew Lustman. A producer who's already carved out a name as one of the most exciting talents to emerge in electronic music of late, he's released albums on Planet Mu, supported Radiohead (and topped Thom Yorke's office playlist,) as well as remixed the XX, Scuba and Mount Kimbie - to name but a few. He also has his own label, Blueberry Records, in collaboration with which Ninja Tune presents "Hardcourage".

"Hardcourage" is the NYC-based Lustman's masterpiece: an electronic opus inspired by love and crafted with renewed intent and dedication. Lustman often makes mention of attempting to channel the music in his head, to allow it to pour forth direct from his subconscious. In "Hardcourage" it seems he's succeeded. The music here feels incredibly natural, the songs taking the most perfect of shapes, their emotive rise and swell both subtle and immensely powerful.

Halfway through making the album, Lustman fell in love - the object of his affections rapidly becoming his muse. He's been very lucky in more ways than one: "Hardcourage" is full of uplift, energy and purpose - it genuinely feels like all the best parts of falling in love.

The album's opener "Stay, I'm Changed" is much more than just a track that happens to come first; it genuinely opens the album, setting the tone and enticing the listener in to the self-contained world within. From its initially tentative, horn-like synths, it gradually grows in urgency, drama and emotional depth.

Second single "She Sleeps" is the only vocal track on the album, featuring a brilliant, haunting turn from the Friendly Fires' Ed Macfarlane. The pair bonded over a shared love for garage music, (ironically, garage being the sound Falty has moved away from on the album.) The collaboration feels instinctive and inspired, two minds meeting to make a song with a purity and vulnerability not often found in electronic music.

"Finally Some Shit / The Rain Stopped" feels like the blues lifting. Its pattering drums bring to mind rain against a windowpane, the driving bassline is like renewed resolve captured in music. "Hardcourage" is about 'when things are in Limbo and having the courage to carry on,' says Lustman, and nowhere is that more in evidence than here.

The album’s first single "Straight & Arrow" summarises the musical direction Lustman has taken with "Hardcourage". His move away from a US take on garage has resulted in a masterful brand of atmospheric, soul-drenched house and electronica. As you'd expect, Falty has applied as much vision to the album's close as he has its beginning. "Bells" has a strong claim to be electronica's greatest love song. Like the clouds parting, the heart leaping, the world seeming to chime with happiness, it's the perfect end to the perfect declaration of love.