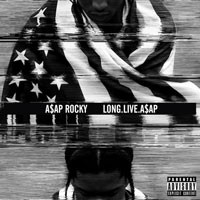 '"All I see is fake love, smiles, and overbites, but I'm pimping," assures A$AP Rocky on "Suddenly", the final track from his masterpiece debut "LONG.LIVE.A$AP".

It's a brooding and brilliant rumination on fame replete with soulful samples amidst minimalist haunting production. He name checks Busta Rhymes, Puff Daddy, and Eazy-E, but he's most certainly his own man, especially declaring, "This ain't no conscious rap".

That's the most interesting aspect of "LONG.LIVE.A$AP". He's so talented that it almost sounds like it's not conscious. Album opener "Long Live A$AP" rolls through hollowed out tones as he ponders, "I thought I'd probably die in prison". His inflection hits hard just before dropping into an eerie yet irresistible chorus.

The record thrives on those dark contradictions, and it's another reason why the album remains one of the most intriguing hip hop records in years. Santigold pops up for a frenetic cameo on "Hell", while "Fuckin' Problems" might as well be a master class in 21st century rap with 2 Chainz, Kendrick Lamar, Drake, and A$AP all tearing up a beat together. The most mind-blowing genre-mashing happens during "Wild for the Night" where Skrillex goes buck wild with our narrator.

As the last strains of "Suddenly" taper off, it's clear that A$AP has officially arrived as a rap leader. This is the first classic rap album of 2013 and the beginning of a legacy.