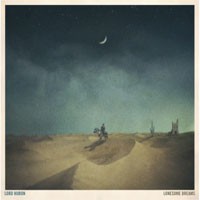 A joyous collision of Appalachian percussion, rustic guitars and sumptuous harmonies lit up by lens-flare flashes of electronics, it’s a record inspired by the rust coloured canyons and characters of the Wild West, with the emphasis on wild.

Tales of the great American outback have always been an inspiration, according to Schneider. “Sometimes I feel like I’m living in one of those stories,” he confides. “I wanted to look at my life and lives close to me as though they were tales from some frontier novel.”

One thing that can’t be ignored with is the scale of Schneider’s ambition. Not content with writing an album of eclectic beauty, ‘Lonesome Dreams’ also encompasses short films, intriguing artwork and a series of imagined novels by a fictional ageing wordsmith, the mysterious George Ranger Johnson. “I'm interested in creating a world with its own mythology,” says the Michigan native. “I look at different media as ways to enrich the story.”

The result is an album as vast and easy to lose yourself in as a Sergio Leone cinescape. Field recordings loop and cavernous drums echo while Schneider’s layered vocals drift airily across its surface like tumbleweeds across a dusty desert sprawl. From galloping recent single ‘Time To Run’ to the gamelan groove of ‘The Man Who Lives Forever’, its charms are impossible to deny.

Lord Huron began as a solo endeavour in 2010 but Schneider has since enlisted some of his “best amigos” to turn his songs into a powerful live experience: Mark Barry (percussion, vocals), Miguel Briseno (bass, percussion), Brett Farkas (guitar, vocals) and Tom Renaud (guitar, vocals). “We’ve got a pretty good working relationship,” he says. “A good wrestling match can solve almost anything we disagree about.”

Gathering momentum in the States with a fantastic live performance on ‘Tonight With Jay Leno’, hoards of praise from the likes of Filter, Fader, Rolling Stone, Entertainment Weekly and USA Today, and a recent tour across the US with sold out shows in Chicago, Philadelphia, Washington DC, Boston, LA and NYC. They will visit Europe for the first time around the release of the album.

“His music sails above those geographic and romantic landscapes as a thoroughly tuneful, reverberant extension of folk-rock” - New York Times

“The last true band you need to hear this year” - Esquire

“These songs are sturdy, and what marks they set for themselves, they hit” - Pitchfork

* = Bonus Tracks Available On CD Only.