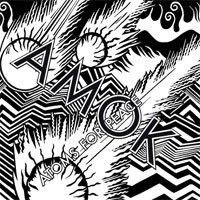 In Thom Yorke’s own words: “We formed to learn to play ‘The Eraser’ record, if you know that, and discovered a really good energy doing that… and it fell into this record. I’m still reeling from being on tour for much of the year but we are planning to get together and play etc next year! We’re figuring all that out right now. Atoms… is an ongoing and open ended project, where it leads I know not for certain... which is what is nice about it.”