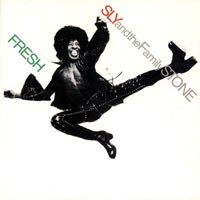 When bassman Larry Graham and drummer Greg Errico split before the 1973 "Fresh" sessions, Sly and the Family Stone kept the pedal on cruise-control as though nothing had happened. Refrying the old Doris Day chestnut, "Que Sera, Sera", helped brighten the mood considerably from the almost scary sound of "Riot". Recorded in 1973 it’s steeped in the narcotic haze of political and social protest, but it is also an undeniably funky album. Elastic basslines, foot-stomping beats, eccentricity lurking around every note; Fresh is cool demonstration of why Sly And The Family Stone were one of the most influential bands in ‘black’ music, and Fresh is one of the best Funk albums of its era. But even though "If You Want Me to Stay" stormed the charts, Sly's increasingly erratic behavior was a bellwether that the glory days of Sly and the Family Stone seemed numbered.

Sly And The Family StoneDance To The Music