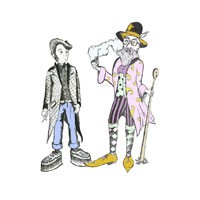 Boz Hayward’s third album is a collaboration with the late Brian Tibby. Shortly before falling ill, over a number of weeks Brian - the regular opener at Chorlton Folk Club - gave a series of handwritten letters to Boz, containing amongst them a series of whimsical observations of local life… Inspired by the workings of Brian’s colourful and wonderfully eccentric imagination, ‘Edward Edwardly and the Marquis of Flixton’ is Boz’s witty response, a 13 track album which, named after one of the most vivid character sketches from the collection, sets each of these to his own unique blend of orchestral urban folk music.