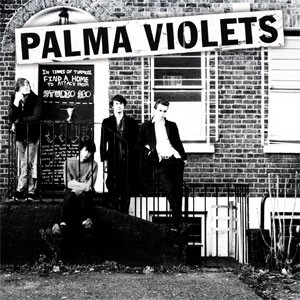 One of the most highly anticipated debut albums of the year, comes in the shape of the Palma Violets '180' via Rough Trade Records. They kicked things off with last years 7" debut 'Best Friend' - a burst of raw hook-filled energy which sets a general template for the entire album. The tempo fluctuates throughout, but there's always that energy bubbling away. I've read a couple of reviews that have said it sounds a little rough around the edges, but I don't think it's any worse for it. It has an urgency and exhuberance that goes some way to matching that of their live performances.

‘180’ is also the number of the Lambeth house that the four-piece have become known for regularly throwing parties and impromptu gigs for friends and fans in. The album artwork features the band stood outside the building.

'180' was recorded in London at RAK Studios (produced by Steve Mackey), and also at The Lightship (produced by Rory Attwell).