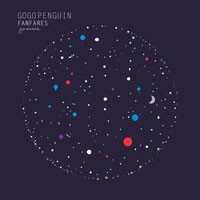 Manchester has produced some of the UK's greatest rock bands from Joy Division to the Stone Roses, but it isn't just the indie scene that thrives here, from the likes of Jon Thorne and Stuart McCallum to the Beats & Pieces Big Band and trumpeter Matthew Halsall, Manchester's jazz scene has produced some of the UK's brightest and most original jazz groups. Now with its eighth release Matthew Halsall's Manchester based Gondwana record label shines a light on another of Manchester's expansive, brilliant piano trio GoGo Penguin. Featuring pianist Chris Illingworth, bassist Grant Russell and drummer Rob Turner (all still in their twenties), GoGo Penguin, draw on a heady brew of influences from Aphex Twin to Brian Eno, Debussy to Shostakovich and Massive Attack to EST.

David says: GoGo Penguin have a terrible name admittedly but don't let that put you off. Signed to Matthew Halsall's Manchester based label, Gondwana, this is their first (and best) album. Piano heavy and big with Gilles. Essential.