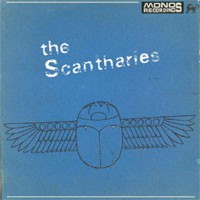 The Scantharies are a new band put together by Anglo Greek musician and producer Andy Dragazis, the artist formerly known as Blue States, who released albums on Memphis Industries and XL Recordings.

Dragazis, who splits his time between London and the Greek island of Evia, came up with the idea of an album influenced by the Greek garage rock scene of the 60s and 70s whilst driving to buy cigarettes with his uncle listening to his old compilation tapes, an eclectic mix of old Greek bands such as The Persons, The Forminx and Aphrodites’ Child, traditional Greek Rebetiko music of composers like Stavros Xarhakos and the mainstream instrumental guitar workings of The Ventures.

The album is an imagined ‘best of’ compilation of a band called The Scantharies, who he imagined bestrode the Greek music scene from the late 60s through to the end of the 70s.

Dreams Island is the island famously visited by The Beatles in the late 60s with their ‘fixer’ Magic Alex. Dragazis imagines that this visit inspired four local Eretrians to start a band called The Scantharies, a play on the Greek word for beetle. The band would morph from a simple guitar led instrumental garage group into a more widescreen and experimental ensemble absorbing more diverse musical influences, becoming increasingly religiously obsessed, before ultimately dissolving in acrimony, overdoses and obscurity.