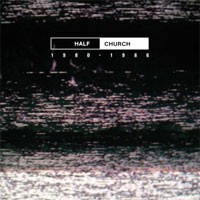 Sometime in the middle of 1980, Tom “Jinks” Durkan ventured to California from Shepherds Bush, London, and settled in Palo Alto. His goal, besides escaping from London, was to find musicians and form a band. Jinks met drummer Bob Gaynor, guitarist Rick Tedeschi, and bass player Monte Vallier and Half Church was born. Following a series of local shows and demos, the original 4 members decided that a move to Jink’s hometown of London was the next logical step. And in January 1981, just as Ronald Reagan was being sworn in to office, the band flew to the UK where a whole slew of songs were written and recorded for their first EP (the highly sought-after “In Turmoil”). The band returned to the Bay Area later in the year and resumed shows and recording, getting tighter as a band all the while. Half Church played their last show at the San Jose Convention Center opening for Red Lorry Yellow Lorry in 1986 and the band members went their separate ways.