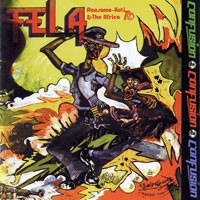 Fela Kuti's 1975 "Confusion" shows him and Africa 70 at the heights of instrumental prowess and ambiguous jibes (the stabs are about to get a bit more direct and heated with 1977's "Zombie"). "Confusion" begins with an unusual free jazz interplay between Fela on organ and drummer Tony Allen that has the presence of 2001: A Space Odyssey in its omnipresent drama. Then the group falls into a lengthily mid-tempo Afro-funk that plays with a sureness that only comes from skilled musicians and a dictator-like leader; here is the formula that had made Fela a genius: Once he has the listener (or the crowd - as all of his songs were originally meant to entertain and educate his audiences at the Shrine) entranced in his complex (and at the same time, deceptively simple) arrangements of danceable grooves, he hits them with what he wants to say. "Confusion" is a comment on the general condition of urban Nigeria (Lagos, in particular). Fela uses traffic jams, no fewer than three dialects, and a multitude of currencies that make trading difficult to complete the allusion to the general post-colonial confusion of a Nigeria lacking in infrastructure and proper leadership. "Confusion" is a highly recommended 25-minute Afro-beat epic.