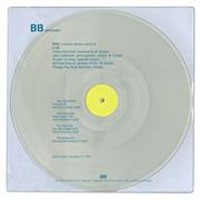 Vocalist Damo Suzuki’s departure from CAN in 1973 had forced the band to re-evaluate their sound. Now with Michael Karoli and Irmin Schmidt sharing vocal duties, the band had also begun drawing on influences from disco and glam. While still remaining staunchly outside the mainstream, they undoubtedly became more accessible to a wider audience, and soon had a huge fan base in the UK. In fact, just a few months after playing the live show found on this double LP (recorded in Lyon in January of 1976), CAN was even on Top Of The Pops!

SIDE B: “The Cyan Side”
1.Dizzy Dizzy
2. Chain Reaction

SIDE D: “The Black Side”
1. More Spree Vitamin C