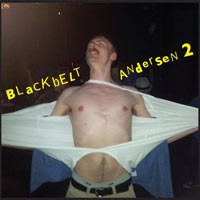 Daniel “Blackbelt” Andersen has been active in the Norwegian dance music community for a number of years. The Blackbelt sound can be described as Juan Atkins jamming with Airto Moreira, with a bit of Larry Levan thrown in for good measure. Sparkling tech-tinted house meets cosmic disco is the order of the day here, with lush synth washes, arpeggiated keyboard lines, simple 4/4 beats and tripped-out vistas.

A few words from Prins Thomas: 'The raw material which became “II” has the same DNA as Blackbelt’s debut. His ideas might lay around for 5-10 years before that crucial missing “middle part” pops out of nowhere (or in this instance: two old ideas gets combined into a new one) but essentially they all come out with the same colour, taste and smell… and they all sound like nothing but Blackbelt Andersen. Over a three month period in 2011 I invited Daniel into the mess that I call K16 Studios for a hectic but creative reworking of the material that he had piled up. The idea was to use Daniel’s tracks as templates and use whatever kind of tool we had at our disposal to colour in the white fields. Kalimbas, cheap old throwaway synths, guitar amps and effect boxes…'