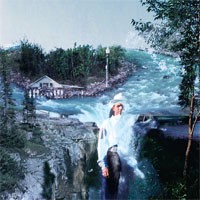 "We hope it sounds like a series of failed Springsteen anthems played with too many chorus pedals. That is the theme."

By The Sea make music that can’t contain itself, that is so bursting with joy it sounds like it is tripping over itself in its desire to get out of the speakers. And yet whilst some of these songs sound like anthems, there is a constant introspection that stops them from ever sounding bloated.

There have been comparisons to early Stone Roses, The Go-Betweens and dreampop, but like fellow young Northerners, MONEY, they are pulling on past influences and making them sound like the the most disorientating love affair that ever failed.

This album comes out on Dell’Orso and on vinyl by our friends at Great Pop Supplement. Dream Waters is the current GPS 7” single, and Alone Together will come out as a single in January with a remix of Game Of Circles by label mate, Cian Ciaran (Super Furry Animals)

“By The Sea are a hugely exciting Merseyside based band who are more than successfully crafting that melancholic yet entirely satisfied sensation; the one that feels like you’re semi-drunk on England’s annual baking hot afternoon, even though it’s pissing down with the ferocity of Charlie Brooker outside” - Not Many Experts