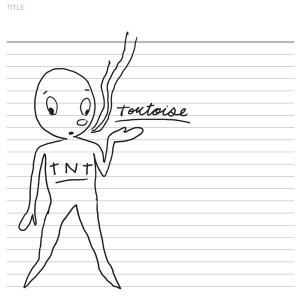 1998: Tortoise’s third studio album ‘TNT’ is released. In and out of print over the past decade, Thrill Jockey are happy to finally give everyone what they have been asking for - ‘TNT’ on vinyl again.

Pressed on high quality virgin vinyl, the double LP is packaged in a deluxe old-style tip-on gatefold jacket fully replicating the original artwork and includes a download coupon for the first time.

‘TNT’, Tortoise’s third full-length release, was written and recorded during a 10-month interval in 1997. This longer-than-usual writing / production schedule was purposefully undertaken by the group in the hopes of crafting an expansive, diverse, yet thematically coherent offering.

‘TNT’ builds upon the spare, instrumental framework of the group’s first, self-titled album, and the extended edits, melodic adventures, and klangfarben of the subsequent full-length release, ‘Millions Now Living Will Never Die’. Further to this, Tortoise’s interest in the possibilities offered by the remixing of tracks was realized within the actual production of ‘TNT’; individual elements, sections, or sometimes whole compositions mutate within the album’s shifting framework. These techniques were suitably realized, thanks in part to the use of non-linear digital recording and editing methods, the first example of such work for the group.

TNT
Swung From The Gutters
Ten-Day Interval
I Set My Fave To The
Hillside
The Equator
A Simple Way To Go
Faster Than Light That
Does Now Work
The Suspension Bridge At
Igazu Falls
Four-Day Interval
In Sarah, Mencken, Christ
And Beethoven There
Were Women And Men
Almost Always Is Nearly
Enough
Jetty
Everglade