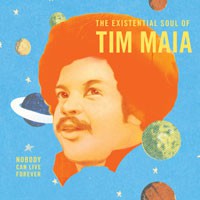 Enter Tim Maia with a massive cannonball into the pool. It was the only dive Tim knew. Standing just 5'7 (6' with the afro) Tim Maia was large, in charge and completely out of control. He was the personification of rock star excess, having lived through five marriages and at least six children, multiple prison sentences, voluminous drug habits and a stint in an UFO obsessed religious cult. Tim is also remembered as a fat, arrogant, overindulgent, barely tolerated, yet beloved man-child who died too young at the age of 55.

Sebastiño Rodrigues Maia was born in Tijuca, Rio de Janeiro, on September 28, 1942. In 1957, at the age of 17, the singer went to America. He left home with $12 in his pocket and no knowledge of English. He adopted the name 'Jimmy' and lied to the immigration authorities, saying that he was a student.

Living with distant cousins in Tarrytown, New York, he worked odd jobs and committed petty crimes. Having a prodigious ear he quickly learned to speak, sing and write songs in English. He formed a small vocal group called The Ideals who even recorded one of Tim's songs, "New Love." Intent on starting a career in America, Tim never planned on going back to Brazil, but like a badass Forrest Gump, he also had a knack for being in the wrong place at the wrong time. In a 1964 early pre-cursor to Spring Break's modern debauchery, Tim was busted in Daytona, Florida for smoking pot in a stolen car and served six months in prison. U.S. Immigration caught up with him and he was deported.

Tim's first commercial records showed that a black Brazilian singer could assert his identity with confidence and power. His music helped to build the Black Rio movement, a new Afro-Brazilian music culture influenced by the US civil rights struggle. As a result, Tim Maia's soul music described a modern Black Brazilian identity that blew the doors off mass culture's tightly circumscribed role for Afro-Brazilians. A funny thing happened when Tim Maia launched his career in Brazil: he kept on writing and recording songs in English. Every album (all self-titled, with only the copyright years to differentiate) included at least one, if not a few songs in English. Obviously, Tim "Jimmy" Maia's teenage dreams of international soul success didn't die when he was deported from the US.

In 1971, fresh from the big hit of his first album, Tim went to London and spoiled himself. He smoked, inhaled, drank, traveled on acid, listened to music, argued with his wife and returned to Brazil with 200 doses of LSD to distribute amongst his friends. As soon as he arrived, he went to (recording company) Philips' offices, which he called "Flips," where he visited various departments, beginning with those he considered most "square," like the accounting and legal departments, where he acknowledged the boss and repeated the same introduction, in a calm and friendly voice: "This here is LSD, which will open your mind, improve your life, and make you a better and happier person. It's very simple: there are no side effects. It is not addictive and only does good. You take it like this . . . " He would place the acid in his mouth, swallow it and leave another at the front desk. Since he was one of the best-selling artists for the company, everyone thought it humorous. In the production and journalism departments, the gifts were a success. Even Andre Midani, the president of the company, received his.

In 1974, he converted to a religious sect, the cult of Racional Engergy. The sect was based in the faith that we are perfect beings from a distant planet, exiled on Earth to suffer but able to purify through the reading of a single book and to finally be rescued by flying saucers of our original home. It was a perfect fit for someone like Tim.

David says: Original Tim Maia records are thin on the ground in Manchester so sometimes a good comp is the only thing that can fill the gap. This is an afro, latin, psyche pop masterpiece made by a man who believed that we're all aliens exiled on Earth to suffer. If that's true this is as good as way as any to spend your time until the space ship returns to pick you up and take you back home.

Tim MaiaWhat You Want To Bet ? / These Are The Songs