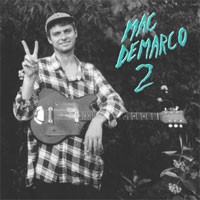 Now, all of six months later, Mac is back with his first proper full length, Mac DeMarco 2. As opposed to RNRNC, “2” is a concerted effort to produce a cohesive work that showcases Mac’s natural ability as a songwriter, singer and producer. With a new arsenal of recording gear, the fidelity has substantially improved without compromising the immediacy and organic quality of his prior releases under any monicker. The results are immediately rewarding, from the warm “Cooking Up Something Good” to the heartfelt “My Kind of Woman.” It’s obvious Mac is presenting himself musically in the most sincere way possible, no matter what happens in his wild videos or live shows. “Freaking out the Neighborhood,” Mac’s apologetic ode to his loved ones about such public behavior, shows that Mac DeMarco is still with us, coming along for the ride, getting everyone else in trouble. Even so, the maturation process of Mac DeMarco, recording artist, is in full swing. He did, after all, turn 22 this April.

Ryan says: His first full album, full of quirky garage gems, slightly odd but in a good way... I think it's awesome anyway.